Defending Twitter: For those who just don’t “get it” 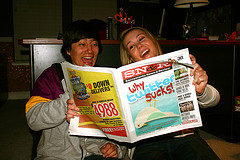 In response to the recent backlash against Twitter among those in the media and elsewhere who just don’t “get it,” I direct your attention to a great extraordinary article written by Geoff Manaugh over at BLDGBLOG.

I wholeheartedly subscribe to the notion that Twitter—the technology/platform/operating system/infrastructure—is separate from how people use it.

But I found his two comparisons of ball-point pens and using notebooks in public to be one of the most striking examples of a McLuhanesque consequence of a medium like Twitter:

Imagine a world where everyone used typewriters: they write novels, manifestos, historical surveys, and so on, and they do it all using typewriters.
Now the ball-point pen comes along. People use it to write down grocery lists and street addresses and recipes and love notes. What is this awful new technology? the literary users of typewriters say. Ball-point pens are the death of humanism.
Nevermind, of course, that you can use ball-point pens to write whatever you want: a novel, a screenplay, epic poems, religious prophecy, architectural theory, ransom notes. You can draw astronomical diagrams, sketch impossible machines for your Tuesday night art class, or even work on new patent applications for a hydrogen-powered automobile â€“ it doesn’t matter.

He describes Twitter as a note-taking technology. Fair enough. Regardless, you really need to go read the rest.

How the Other Half Writes: In Defense of Twitter [BLDGBLOG]

Next post: Sirius-XM iPhone app finally on its way!

Previous post: If Ford can do it, why can’t GM and Chrysler?