by Philip Ryan Johnson on July 26, 2011
in journalism, social media 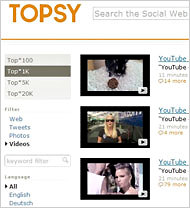 Topsy is a dedicated site for searching Twitter. Itâ€™s better, it turns out, than Twitterâ€™s own search functions.

If youâ€™ve tried to search for tweets on Twitterâ€™s built-in search box, you know it can be frustrating.

For a currently popular topic, youâ€™ll get dozens of recent tweets. For an older topic, you may get no results at all. Twitter has an advanced search page, but a better alternative is Topsy, a dedicated Twitter search engine. Itâ€™s so good that even Twitterâ€™s official guide for journalists suggests using Topsy to research news topics.

Topsyâ€™s advanced search, linked from its home page, lets you search for specific Web domains or Twitter users, tweets posted during a specific period of time in the past, and for all tweets with the word â€œladyâ€ but not â€œgaga.â€ You can also specify only tweets that include photo links, video links or Web links.

Topsy has indexed tweets back to mid-2008. It does not keep them all, but it does keep the ones that were retweeted a lot, or that came from people whom Topsy deems influential because they are often retweeted or cited in other peopleâ€™s tweets. That same influence algorithm lets you sort search results by relevance rather than in chronological order.

Topsy is also a good way to check in on whatâ€™s hot on Twitter right now. The siteâ€™s home page features a frequently updated list of trending links, again sorted by relevance. For example, if a few celebrities tweet a video, it will rank higher than one tweeted by a larger group of little people. And thereâ€™s a special page devoted to trending videos. Click the video thumbnail, and Topsy pops up a video player rather than sending you to YouTube or another site. Right now the top video is a bunny playing with a ball of string. The people have spoken.